Search for and buy your domestic flights within Greece on Alternative Airlines. Simply enter your search details in the form above and click 'Search Flights'. We offer flights from a range of Greek and European regional airlines that fly domestically within the country.

For more information on each individual airline, click the airline name to visit each airline page.

Aegean Airlines is the national flag carrier airline of Greece, and also the largest Greek airline by the total number of passengers carried, by number of destinations in its route network and also by the number of aircraft in its fleet.

The airline was founded in 1987 and commenced its flying operations in 1999. It has a number of hubs in Athens, Thessaloniki and Larnaca Airports, with additional bases at other Greek airports.

The following table summarises a list of the destinations in Greece that the airline has previously or currently operated flights to:

Airport: The closing time of airport check-in counters will depend on which airport you are departing from. Generally, this will be around 40 minutes before flying, but be sure to check to ensure you have enough time and do not miss your flight.

Bluebird Airways is a Greek airline based at Heraklion International Airport, flying to many domestic Greek destinations as well as internationally to several European destinations.

The airline was established in 2008 and currently flies to a total of 11 destinations on its fleet of 4 aircraft.

The following table is the list of current Greek domestic destinations the airline flies to:

Airport: Passengers should check-in at the airport at least 2 hours before your flight time.

Ellinair is a Greek airline with hubs at Athens and Thessaloniki Airports. The airline was founded in February 2013, commencing flying operations the year after in February 2014.

Online: Online check-in is open from 48–1 hour(s) before your scheduled flight departure time, closing 3 hours before.

At the airport: Airport check-in opens 2 hours before and closes 40 minutes before scheduled flight departure time.

Olympic Air is a Greek airline operating regional flights to Greece and other European destinations. The airline was founded in 2009 and was merged with it's competitor Aegean Airlines in February 2010.

The table below summarises the current domestic destinations that the airline operates:

At the airport: Passengers can use the self-check-in machines at the airport, which are open 24 hours - 30 minutes before your flight.

Sky Express Greece is a Greek airline based in and headquartered in Athens International Airport. It was founded in 2005 and currently has 14 aircraft in its fleet which fly to over 30 destinations, including international and domestic destinations.

See the table below for a summary of the current domestic destinations in Greece that the airline flies to:

At the airport: Passengers can check-in for their flights at the airport, which closes 30 minutes before the flight is due to depart.

Hellenic Seaplanes is a seaplane company, based in Athens. As well as charter flights, in 2021 it was announced that the airline will also be launching scheduled passenger seaplane flights between the mainland and islands.

What are domestic flights? 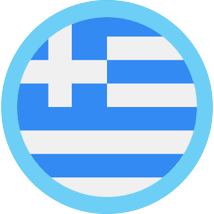 A domestic flight within Greece is any flight that departs from one destination in Greece and arrives in another location within Greece. Because Greece is made up of a number of islands, this could mean that the flight lands on a different island, but still a Greek island. For example, a domestic flight in Greece may be one which departs from the mainland from Athens International Airport (ATH), and lands on a different island of Kos at Kos International Airport (KGS) with a flight duration time of around an hour.

Because of the size and nature of Greece that it is made up of over 200 islands, domestic flights are a great option of getting around the country. It is a logical, cheap and quick way of travelling, especially when compared to driving and/or getting a boat.

Greek domestic flights are usually provided by Greek airlines. Some of the most popular airlines in Greece are:

Why book domestic flights in
Greece?

Greece is a beautiful country which offers so much to visitors. In fact, there's no doubt as to why this country is a popular tourist destination, for anyone from adventure travellers to honeymooners.

Greece offers rich ancient history, from the Acropolis and Parthenon in Athens, to the tree of Hippocrates in Kos, or the location of the first Olympics; Olympia! There are also great cities and major towns to explore in Greece, but also you can head to the many beautiful beaches to relax, or spend a day exploring the natural history such as the still-active volcanoes.

Do I need a passport for domestic flights in Greece?

With most airlines, if you are travelling domestically within Greece you will only need an ID card. However, it may be best to check with the airline you are flying with to see what travel documents you may need.

What is the baggage allowance for domestic flights in Greece?

The free baggage allowance for domestic flights in Greece will differ depending on the airline.

Can I buy domestic flights in Greece online?

Yes, on Alternative Airlines you can buy Greek domestic flights online, including to some of the smaller regional airports that you may not find on larger travel sites.