What is a Combi Aircraft?

A combi aircraft is a plane that has the capability to carry both passengers and cargo, either in separate flights or simultaneously. This is achieved by either having a divide in the cabin that allows passengers in one section and cargo in another or by having removable seats that can transform the plane between from passenger to cargo.

A combi aircraft is recognisable from the outside by its large aircraft doors, which exist to facilitate the passenger-cargo transformation.

Combi aircraft were particularly popular around the 1970s on routes where there weren't enough passengers flying to fill the aircraft. To make the service financially viable, in addition to passengers, airlines would use the aircraft to carry cargo. However, as the demand for passenger flights has grown, combi aircraft have become less of a necessity. While there are still some airlines that use existing combi aircraft, there are currently none in production. 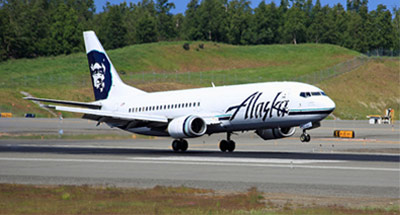 Over the years, combi aircraft have been created by many different aircraft manufacturers, including Boeing, McDonnell Douglas, de Havilland and ATR. Airbus has never produced any combi aircraft

Airlines that currently use
Combi aircraft

Alaska Airlines has long used combi aircraft on flights and is currently the only domestic airline in the US that operates combi flights. Due to Alaska's location, size, climate and the fact that it's so different to everywhere else in the US, a cargo section on the plane has always been a great been of great benefit to them.

Most recently, Alaska Airlines is using the Boeing 737-400 combi, which has the capacity to carry 72 passengers. Passengers board and disembark from the back of the plane, which is where they're seated from row 17 onwards. The front of the plane is reserved for cargo-only.

Canadian North, an airline that focuses on the northwest territories of Canada is a great example of an airline that still uses combi aircraft to make up for the lack of demand for passenger flights on certain routes.

Canadian North uses both Boeing 737-300 and Boeing 737-200 to operate its flights. These aircraft are customisable, depending on how many passengers are booked and how much cargo needs to be transported.

The Boeing 737-200 can operate using the following formations:

The Boeing 737-300 can operate using the following formations:

Much like Canadian North, First Air uses combi aircraft on less-popular routes in the north of Canada. The airline operates combi services with the Boeing 737 400 combi, which has four pallets of cargo in the front and 72 seats for passengers in the back.

KLM has been using combi aircraft since 1975 when it took in an order of Boeing 747-200 combi planes. KLM found great use in the combi plane and — by the end of the decade — updated its fleet with Boeing 747-400s, which is the same aircraft that it uses for combi flights today.

The combi aircraft fly from KLM's hub airport, Amsterdam Schiphol, to various destinations across the world, including to the US, India, Kenya and China.