Founded in 2014, the airline is now seeking to expand its international services to Taiwan, Hong Kong, Macau, China, South Korea and Japan. In 2017, Cambodia Bayon airlines announced it was heavily recruiting Taiwan's TransAsia Airways, which closed its services last November and dissolved its business operations Wednesday.

Pilots who have experience flying TransAsia's fleet of A320s and A321s on international and cross-Taiwan Strait routes and those who flew ATRs on domestic flights will be of interest to the Cambodian carrier.

The Economy Class experience is simple, designed to get passengers from A to B in a relaxed, safely and in comfort.

Passengers are each given complimentary water and a pastry.

As the airline only operates short flights, there's no in-flight entertainment onboard the service.

The Economy Class cabin is made up of 50 seats, with 48 of them being Economy. Seats are set out in a 2 x 2 configuration and are designed to give passengers enough legroom and space for a comfortable journey. 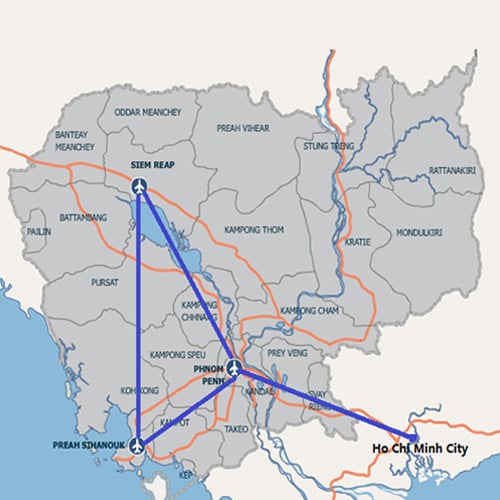 Cambodian aviation: seven airlines and more to come in 2018; start-ups and fleet proliferating

Cambodia’s aviation sector is growing rapidly, leading to a rapid expansion of the Cambodian fleet. There are now seven airlines in Cambodia, together operating a combined fleet of 30 aircraft, compared to two airlines operating seven aircraft four years ago.

At least three new airlines are planning to launch operations in 2018, while several of the existing airlines are pursuing further fleet expansion. The Cambodian fleet will likely reach 40 aircraft by the end of 2018.

JC International Airlines, an ambitious start-up which began operations less than a year ago, could become the largest airline in Cambodia by the end of 2018, based on fleet size. Cambodia Angkor Air and Sky Angkor Air are now the largest local airlines and are also the most established.