Aruba Airlines is the flag carrier of Aruba. The airline is based at Queen Beatrix International Airport (AUA), Oranjestad and flies to destinations across the Caribbean, as well as to Colombia. In addition, the airline flies indirect to Miami, US.

The airline was founded in 2006 but didn't start flying until 2013. Initially, the airline only flew charter flights but, in 2013, after gaining its Airlines Operation Certificate, it launched scheduled flights, with a single service to Maracaibo, Venezuela as its inaugural flight. Shortly after, it began offering more flights within the Americas and the Caribbean.

Aruba Airlines is currently the only Aruban airline and one of the main airlines flying to/from the islands, although, passengers can fly to Aruba with airlines with the Caribbean. The airline was created to fill the gap that was left when Aruba's previous flag carrier, Air Aruba, ceased operations in the early 2000s. After Air Aruba stopped flying, a number of other Aruban airlines launched, but none of them survived for very long. Aruba Airlines is the longest-serving airline since Air Aruba.

Here's a full list of destinations and the airports that it flies to: 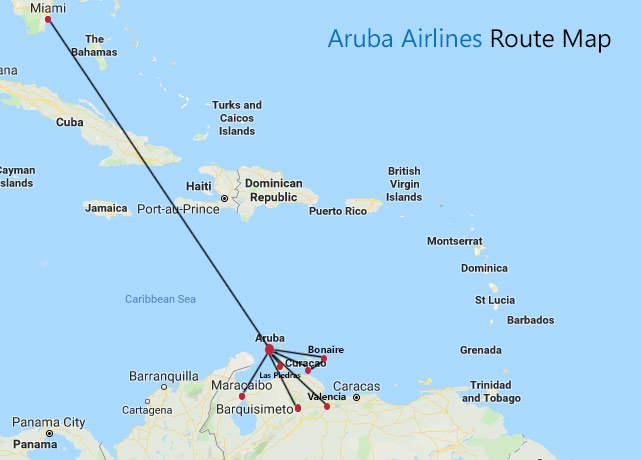 Aruba Airlines allows one piece of hand luggage with a maximum weight of 8kg. The maximum dimensions should not exceed 50cm x 35cm x 23cm including wheels and handles.

In addition to this, passengers can bring a personal item, such as a laptop bag or small backpacks. This can weigh no more than 2 kg.

Aruba Airlines allows one piece of checked baggage per passenger with a maximum weight of 23kg.

Economy Class is currently the only cabin class that the airline offers. It used to fly Business Class on flights to Miami, however, with new aircraft, the airline stopped this service.

The Economy Class cabin is a smooth and professional service, with food and drink offered on all flights. Each passenger is sat in a comfortable seat with plenty of room. Seats are set out in a 3 x 3 formation on all flights.

There's no in-flight entertainment system available on flights. However, the airline may provide passengers with an in-flight magazine to read during the flight, depending on the route that they're flying.

The airline doesn't offer food service but does serve drinks during the flight. If a passenger wants to bring their own food or drink onto their flight, they're able to do so, as long as the items are allowed through airport security and onto the flight.

Online check-in is currently unavailable for flights on this airline.

Airport check-in opens three hours prior to departure and closes one hour prior. Passengers can check-in for their flight at the airport of departure by visiting one of the check-in agents and the airline check-in desk.

Aruba Airlines isn't a member of any airline alliance. It also doesn't have any codeshare or interline agreements.

The airport has services that fly to the United States, Canada, Trinidad and Tobago and many countries in South America and the Caribbean. Other airlines that fly from Queen Beatrix International Airport include Sun Country Airlines, LASER Airlines, LATAM Colombia, Divi Divi Air, Aserca, Jetblue Airways, WestJet, Copa Airlines and American Airlines.