Arkia Israeli Airlines, often known as Arkia, is an Israeli airline with its main hub at Ben Gurion Airport Israel. The airline flies to over 40 destinations across Europe and parts of Asia and Africa. Arkia operates some flights on a regular basis. However, the majority of its flights are flown on a seasonal basis.

The carrier was founded in 1949 under the name Israel Inland Airlines and initially flew routes from Tel Aviv to different regions within Israel. In the 1950s, the airline rebranded and renamed itself Arkia Israel Airlines, which is what it's known as today.

Passengers are entitled to one item of free carry-on baggage with a maximum weight of 7 kg. This baggage must not exceed 20 cm x 40 cm x 55 cm. Passengers must ensure that the carry-on baggage does not contain any prohibited items or it may be confiscated by airport security.

Excess baggage can be added to the flight when booking your flights with Alternative Airlines. Please contact our customer service team for more information.

Arkia Israel Airlines doesn't offer online check-in on its flights. All passengers must check-in at the airport.

Failure to check-in before the airline check-in deadline may result in a loss of fare and the airline has the rights to refuse the passenger to board. 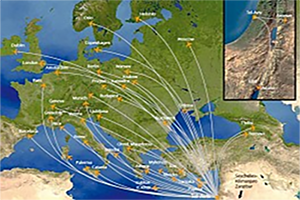 In Economy Class, you are served complimentary refreshments, snacks and a hot and cold beverage. Seats and armrests are both reclinable for extra comfort onboard. Stay entertained with Arkia's in-flight magazine. In-flight entertainment and seats with built-in USB ports are available in the Airbus 321.

On short-haul flights, there's no in-flight entertainment system available on Arkia flights. However, passengers might be given a copy of the airline's in-flight magazine, subject to availability.

On long-haul flights, in-flight entertainment with a selection of movies may be available, depending on the aircraft used for the flight.

Arkia doesn't have a WIFI network installed on its flights.

Passengers are given a complimentary meal on long-haul flights, served with a drink and other refreshments.

On short-haul flights, passengers can purchase snacks and drinks.

All food served on Arkia flights is Kosher. If passengers require a special meal, they must request it at least 48 hours in advance.

Arkia doesn't have a frequent flyer program that rewards its regular passengers for flying with them.

Arkia Israel Airlines isn't a member of any airline alliance at this time.

Ben Gurion Airport is the largest airport of Israel and is the hub airport for Arkia Israel Airlines. It two terminals, three runways and has handled more than 20 million passengers each year since 2017.

Other than Arkia, Ben Gurion Airport is the hub for El Al, Israir Airlines and Sun D'Or. Other airlines that fly to and from this airport include Aegean Airlines, Aeroflot, airBaltic, Air Canada, Air Europa, Ethiopian Airlines, Israir Airlines, Korean Air, Ukraine International Airlines, Uzbekistan Airways, Wizz Air and many others.