Make an ANA Wings Booking and Find Some Amazing Deals

The airline is a subsidiary of All Nippon Airways and was created in 2010 as a new airline when Air Next, Air Cental and Air Nippon Network merged together.

ANA Wings fleet consists of Boeing, Bombardier and Mitsubishi aircraft. Overall, the airline has more than 70 aircraft within its fleet.

Passengers are given 10kg of free carry-on baggage. The baggage must fit within the dimensions of 55 x 40 x 25 cm.

There are no restrictions on the number of pieces of checked baggage that a passenger can bring with them on a flight. However, passengers are given a free checked baggage allowance as following:

No one piece of baggage can exceed the overall dimensions of 203 cm (w x h x l).

You can check-in for your ANA Wings flight online on the ANA online check-in page. Online check-in opens 24 hours before the flight is scheduled to depart and closes 75 minutes before.

Passengers can also check-in at the airport by visiting one of the check-in desks at the airport of departure. Opening and closing times for airport check-in will differ depending on the airport, so it's important to check by either contacting us or visiting ANA's website.

Due to its nature as a regional airline, this airline operates only domestic flights in Japan to the following destinations totalling over 20 destinations: 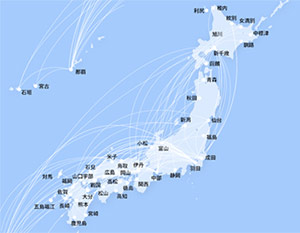 Sapporo Chitose Airport, also known as New Chitose Airport is an airport located in Chitose, Hokkaldö, Japan and is the hub airport for ANA Wings. It is in the top five busiest airports in Japan and facilitates a mix of domestic and international flights, with airlines mainly flying to countries across East Asia, but with limited flights to North America and Europe also. 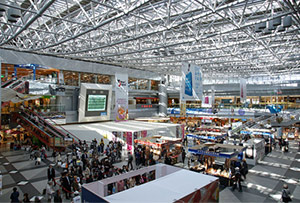