Air Arabia Jordan is a subsidiary of the airline, Air Arabia, based in Jordan.

The low-cost carrier is a joint venture between the RUM Group in Jordan and Air Arabia and will be the first low-cost airline based in Jordan. Air Arabia Jordan was announced in 2015 after Air Arabia announced the acquisition of a 49% stake in Jordanian operator Petra Airlines.

In January 2015, the principal shareholder of Petra Airlines, the RUM Group, retained a 51% stake in the airline, which was rebranded as Air Arabia Jordan in early 2015.

Air Arabia Jordan has ceased operations. However, the airline was a subsidiary of Air Arabia, which is currently in operation with 53 Airbus A320. This is the world's best selling jetliner, fitted with world-class comfort seats, and one of the most spacious economy cabin seat pitch of 32 inches. Check out our page for Air Arabia to find out more!

Air Arabia Jordan's baggage allowance offers travellers the opportunity to only pay for the checked baggage that they need, choosing between 20kg, 30kg, or 40kg in weight. The maximum luggage allowance for one item is 32kg in weight, with total dimensions of 160cm.

Air Arabia Jordan's hand luggage allowance per customer is 10lg in weight, and the item must not exceed the dimensions of 55cm x 40cm x 20cm (or 22in x 16in x 8in).

Infant travellers under 2 years old are entitled to one standard sized bag for the items they may need during the flight. 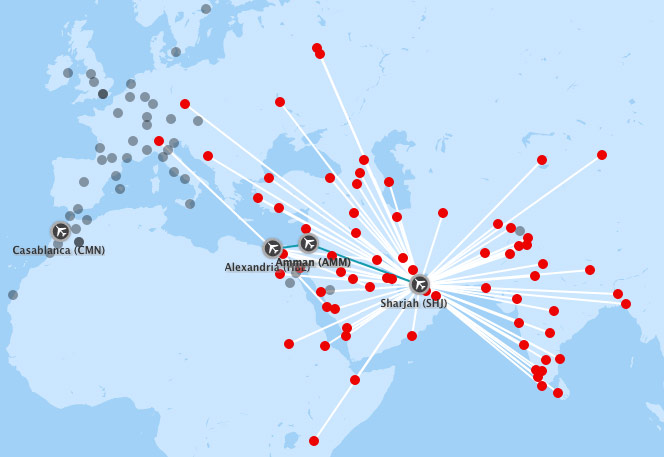 Built in 19823, Queen Alia International Airport (QAIA) is Jordan's main airport and is named after Queen Alia. The new airport terminal was launched in March of 2013, following an overnight operational transfer.