Make a 9 Air Booking and Find Some Amazing Deals

9 Air, also known as Jiu Yuan in Chinese, is a Chinese airline which laaunched in 2015 and is headquartered at Guangzhou Baiyun International Airport, Guangzhou.

9 Air flies to over 20 destinations overall. It mainly serves destinations within China such as Changchun, Harbin, Guangzhou, Nanjing, Haikou and Wenzhou, but also flies internationaly to Myanmar. One of 9 Air's most popular service is a daily 6-hour flight from Guangzhou to Harbin with a stopover in Wenzhou.

The airline is a low-cost carrier that is a subsidiary of Juneyao Airlines and its aircraft cabin is made of up entirely of Economy Class.

9 Air's fleet consists of entirely Boeing aircraft. In total, the airline has over 15 aircraft within its fleet. These include models such as the Boeing 737-800 and Boeing 737 MAX 8.

9 Air's Economy Class is the airline's only cabin class and is designed to give passengers a comfortable and efficient service.

Passengers are given the opportunity to pre-book a number of extras for their flight. These include seats, in-flight meals and extra baggage.

Passengers that don't pre-order a meal will still be given the opportunity to order the airline's in-flight menu, which has a great variet of snacks and drinks.

Economy Class seats are set out in a 3 x 3 formation. Seats are comfortable and give a good amount of space and room. 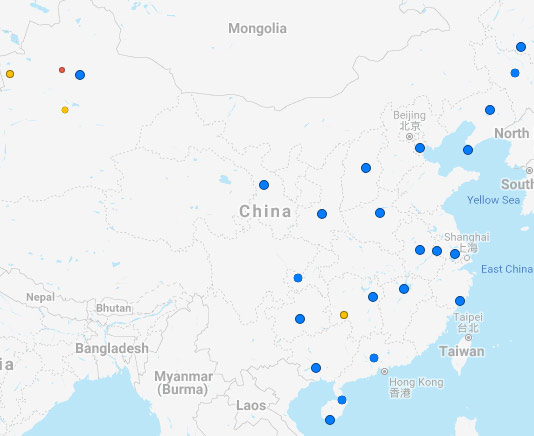 9 Air's Hub Airport is Guangzhou Baiyun International Airport, based in Guangzhou, the capital of Guandong province in China. It is the 6th busiest passenger airport in Asia, and China's 3rd busiest for cargo traffic. The airport has 2 terminals, alongside the FedEx Asia-Pacific hub.

9 Air's free baggage allowance (inclusive of unchecked and checked baggage) for one passenger (adult or child) is 40kg for first class, 30kg for business class, and 20kg for economy class. The dimensions of the luggage must not exceed 40cm x 60cm x 100cm.

Passengers with infant tickets do not have a baggage allowance, but may have a pushchair/stroller free of charge.

On domestic flights, hand luggage dimensions should be less than 20cm x 40cm x 55cm, and it should not exceed 5kg in weight.

9 Air will take delivery of its first B737 MAX next year, and is planning to use it to develop its maiden international routes. According to CAPA, the aircraft will be deployed on flights to northern Japan once in service.

The China Daily has, meanwhile, confirmed that Air China is scheduled to be China's B737 MAX launch operator. The flag carrier is due to take delivery of the country's first B737 MAX at some point this year.