Trans Air Congo (not to be confused with Air Congo) is an airline based at Pointe Noire Airport in the Republic of the Congo.

The private airline was established in 1994 by the El-Hage family and started services with a single Let 410 aircraft.

Initial flights were between two destinations; Brazzaville and Pointe Noire. 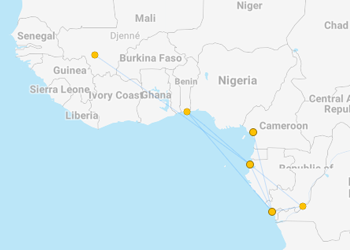 Antonio-Agostinho-Neto International Airport serves Pointe-Noire, a coastal city in the Republic of the Congo. The airport was inaugurated in 1934 and a new passenger terminal opened in 2006. The airport is also a hub for Equaflight.

As of December 2018, the airline has the following aircraft in operation:

MilesPlus is the airline's frequent flyer program. Registration is free and open to all passengers. The airline was the first in Congo to develop a loyalty program, and MilesPlus has proved to be a successful, having enrolled 2200 members since its creation in 2012. MilesPlus offers 4 different cards (Blue, Silver, Gold and Platinum).