Make a Smartavia Booking and Find Some Amazing Deals

Nordavia rebranded to Smartavia in April 2019. All routes and services remain the same.

Nordavia is an airline headquartered in Arkhangelsk, Russia.

Nordavia has a codeshare agreement with Aeroflot and S7 Airlines. Nordavia has Boeing 737-500s in its fleet.

In 2009, Aeroflot sold its stake in the airline, which called for another rebrand. The airline was known as Nordavia from that point onwards. Nordavia was supposed to merge with Red Wings Airlines, but after two years of negotiations and planning the merger fell through. Shortly thereafter, Nordavia rebranded to Smartavia, which is what the airline is known as today.

Passengers can check-in for their Nordavia flight by visiting the Smartavia home page, clicking the 'check-in tab' and entering the relevant flight details where asked. Nordavia online check-in opens 24 hours before departure and closes three hours before.

Passengers can check-in online for their Smartavia flights from any airport, excluding the following:

SmartAvia operates to two international destinations in Georgia, as well as one seasonal flight to Norway.

Economy Class is one of two cabins that the airline offers and the more simple, stripped-back service of the two.

Passengers can enjoy a selection of reading material ranging from in-flight magazines to newspapers.

Passengers are given the opportunity to order a meal from the airline's in-flight menu, which includes a choice of alcoholic and non-alcoholic drinks. The meal choice will depend on the time of day flown and the route travelling on.

Business Class is the airline's most premium cabin class, offering a personalised, luxury service in an isolated section of the cabin.

Passengers go through an exclusive check-in and boarding process, as well as access to the airline's Business Class lounge at select airports.

Passengers are served complimentary meals with three different options on the menu. Passengers can also enjoy complimentary drinks (both alcoholic and non-alcoholic) for the duration of the flight, with a welcome drink waiting for them when they board.

Business Class seats are set out in a 2 x 2 configuration, with each seat giving generous room to stretch out and relax. 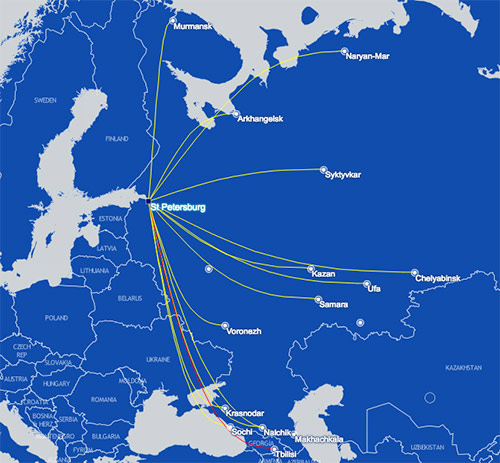 Nordavia to fly between Murmansk and Oslo in summer 2018

This summer, Russian airline Nordavia is to launch a new service that will connect Russia with Norway. The new route will fly between Murmansk Airport (MMK) and Oslo Airport (OSL) once a week from 11th June 2018. The nonstop service has an estimated flight time of 2 hours and 35 minutes and the airline will use the Boeing 737-500 aircraft to operate the route.