Cham Wings Airlines is a Syrian airline operating scheduled carrier services from its base at Damascus International airport (DAM) to destinations in the Middle East and North Africa. The airline is a privately owned by Issam Shammout, a businessman whose family own the Syrian car dealership, Shammout Groups.

Cham Wings Airlines was founded in July 2007 and gained its Aircraft Operator Certificate (AOC) the following year on September 2008. However, Cham Wings Airlines was only allowed to operate non scheduled charter flights by order of the Syrian Civil Aviation Authority. The airline flew its inaugural flight in 2008 with a service between Damascus International Airport (DAM) and Baghdad International Airport (BGW). In 2012 the airline terminated its operations following the unrest in Syria. In 2014, Cham Wings Airlines gained a certificate to operate scheduled passenger flights, the airline became the second Syrian carrier to offer scheduled after Syrian Air. The airline then resumed its operations to fly to destinations in the middle east including Beirut, Baghdad, Qamishli and Kuwait. In 2018, the airlines transported Syrian refugees in Germany from Munich to Damascus and back.

Cham Wings Airlines consists of entirely Airbus aircraft, with the majority of its fleet being made up of 4 Airbus A320-200s.

As of December 2019, Cham Wing Airlines fleet comprises of:

Cham Wings Airlines offer the option to purchase additional baggage, however, the fee of the baggage will depend on where you're flying to.

Economy Class is one of two classes that the airline offers and is the more basic, stripped-back service of the two.

Economy class seats are set out in a 3 x 3 x 3 configuration. Seats are designed to give sufficient room to each passenger for a comfortable journey. The airline offers wide seats and ample amount of legroom.

Guests can choose from a wide variety of snacks and meals with access to Business lounge entry at select airports. Passengers travelling between Sharjah will receive complimentary limousine transportation.

Business Class seats are set out in a 2 x 2 configuration, giving extra pitch and width to each seat giving you that little extra comfort.

The airport is an international airport in the Syrian capital of Damascus. In 2010, the airport handled 5.5 million passengers and is currently used by Cham Wings Airlines, Fly Baghdad and Syrian Air. 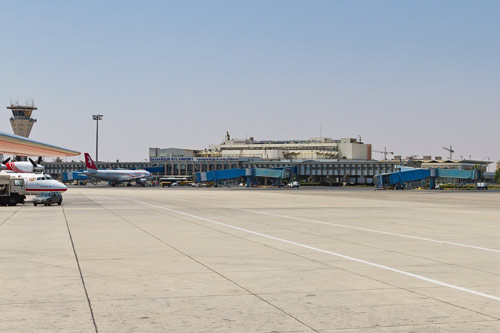 Syrian Airline, Cham Wings Airlines, is making plans to fly to European destinations this year, with the first route in mind being a service between the airline's hub Damascus International Airport (DAM) and Belgrade Nikola Tesla Airport (BEG), Serbia. The airline is looking to fly the Damascus—Belgrade route three times a week, using an A320-200 aircraft to carry passengers. While Cham Wings Airlines is yet to gain approval to fly to Serbia's capital, the airline is looking to fly the new service no later than the end of this summer.