Make a Buzz Booking and Find Some Amazing Deals

Buzz is a Polish airline that offers scheduled passenger services out of Poland. The airline is based at Warsaw Chopin airport and flies to a number of domestic destinations within Poland, as well as other international destinations across Europe. The airline is a sister airline to Ryanair, Ryanair UK and Lauda.

The airline was originally established as a UK carrier under the name 'Buzz Airways' by KLM in 1999. In 2003, it was acquired by Ryanair but then ceased operations the following year and merged its fleet and routes into Ryanair.

In 2017, Ryanair established a new airline, Ryanair Sun, which took control of its flights operating out of Poland.  In 2019, Ryanair decided to resurrect 'Buzz' and rebranded Ryanair Sun to take over the airline.

Only economy class is available on their flight and it is in a 3-3 configuration with no inflight entertainment system.

Buzz's fleet consists of entirely Boeing B737-800 aircraft, the airline has over 32 jets currently active. The airline also ordered 4 737 MAX 8.

Checked baggage is allowed to check-in at the airport up to two hours to 40 minutes prior departure.

Online check-in can be completed by visiting the Ryanair check-in page  and entering the relevant information from the travel documents.  Passengers who have booked a seat can check-in 60 days prior departure, otherwise, you can only check-in online 2 days to 2 hours prior to departure.

Buzz does not have a frequent flyer programme.

The Polish airport opened in 2012, it is located 6 km to the north-west of Nowy Dwór Mazowiecki. There are one passenger terminal and one runway at the airport. In 2015, 2.5 million passengers used the airport. 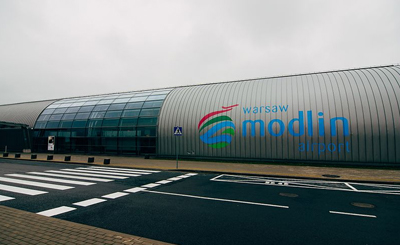 Buzz has not joined any airline alliances.

Please click on the logos below to find out more about airlines that fly similar routes to Buzz: