What is a TSA PreCheck?

A TSA PreCheck permits a number of low-risk travelers (and their children of 12 years and younger) to go through a more efficient and expedited screening process. The membership costs $85 USD and is valid for five years. Having a TSA PreCheck enables you to breeze through security for 56 airlines acrosss over 200 airports, with more being added to the scheme. The main reason people love using their TSA PreCheck is that airport wait time is 5 minutes or less 92% of the time. Plus, TSA Precheck members can keep liquids and laptops in their carry-on luggage and they do not have to remove the following items at security checkpoints:

Who is eligible for TSA PreCheck

The TSA PreCheck program membership is only open to U.S. citizens and lawful permanent residents. If you're a US citizen and active elite member of any of the partner airlines' Frequent Flyer Programs, you may be invited to opt-in for TSA PreCheck. If you choose to do so, you'll only be eligible to go through TSA PreCheck when you're flying on that FFP's airline.

Need to renew your TSA Precheck? Find out how.

How to use TSA PreCheck on flights with Alternative Airlines

If you're a US citizen wishing to buy a domestic flight, use the search form at the top of the page to search flights for your chosen domestic route on your chosen dates.

Once you have selected the flight filters you want, choose the perfect flight for you. 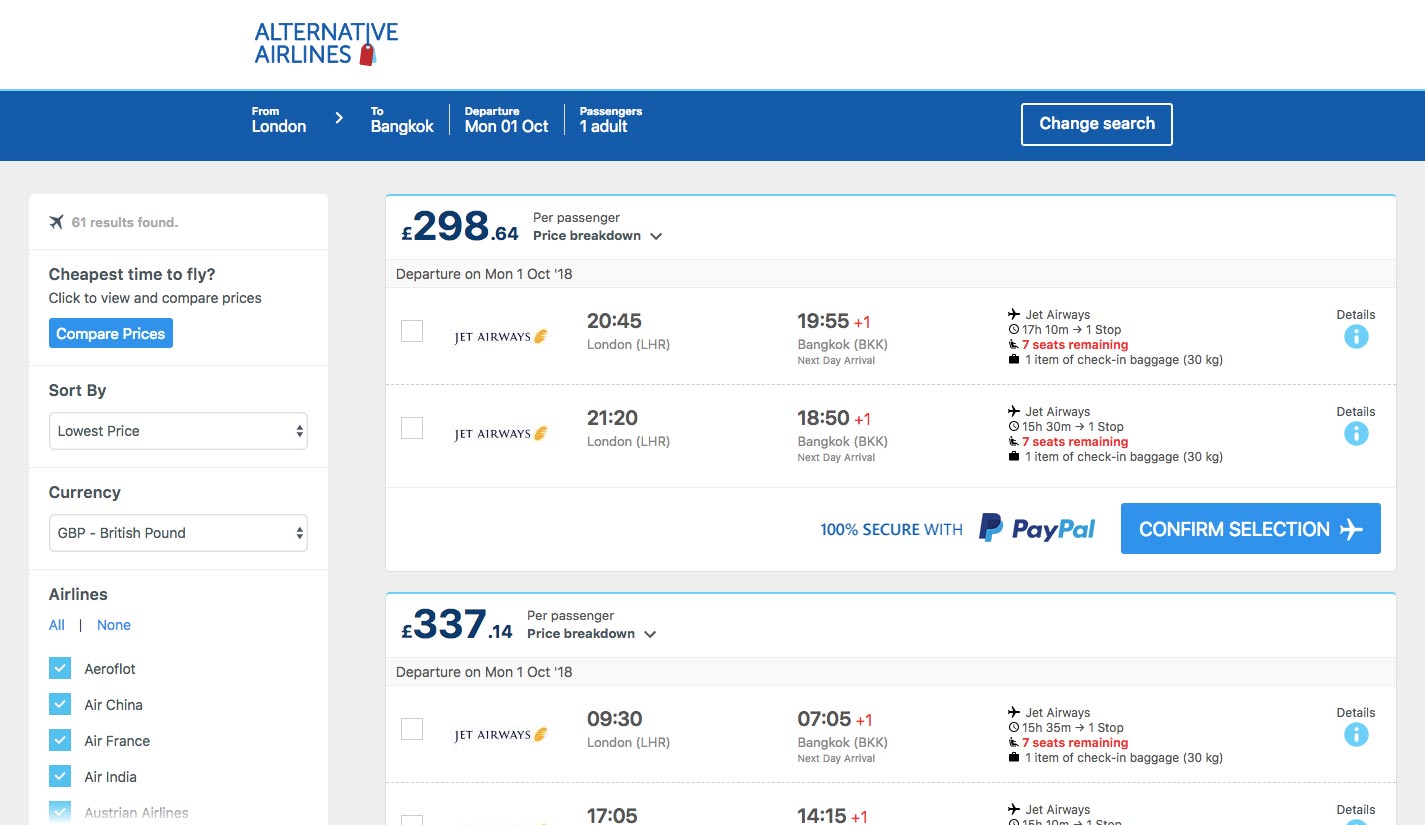 When you reach the passenger details page, you select the option 'Seat, Meal, Special assistance, TSA and more'. This button will reveal multiple options, including a box in which you can enter your known traveler number in order to receive a boarding pass with your TSA PreCheck number on it. 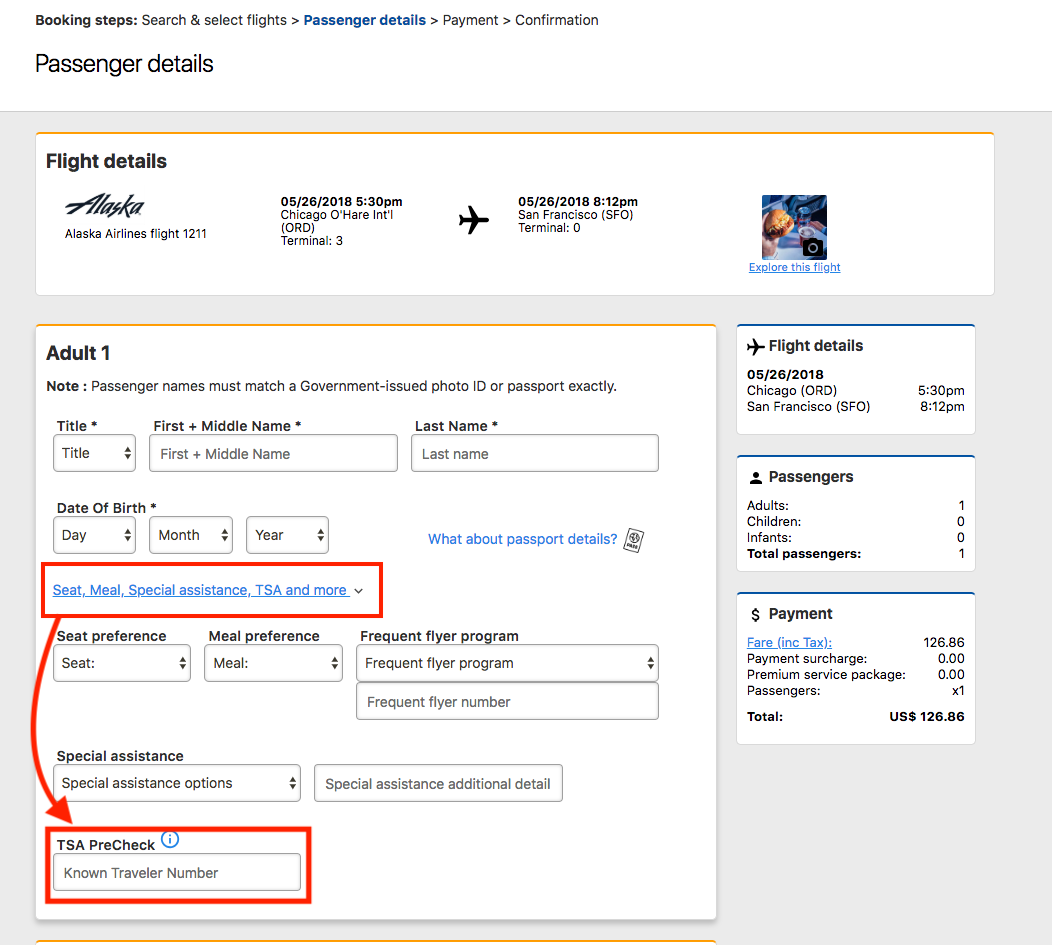 After five years of enrollment, you may be required to renew TSA PreCheck. TSA PreCheck can be renewed from 6 months before the expiry date and it costs $85 USD.

How do I renew TSA PreCheck?

Renewing TSA PreCheck is fairly straightforward. Go to the TSA PreCheck renewal page and enter your Known Traveler Number, date of birth and last name to log in to your account. From there, you'll just need to follow the instructions to renew.

How long will it take for me to get approved?

Once you've applied for renewal, you'll get an email confirming your application. If successful, it will take up to a few weeks for your application to be reviewed and for you to receive a confirmation of renewal.

What if my renewal is rejected?

In some cases, TSA might reject the renewal application and ask that you renew your TSA PreCheck at enrollment center and in person. Although most applications are accepted online, you might need to renew in person if:

Will I need to provide a photo?

No, TSA doesn't require you to provide a new photo for your application. The same photo that you used when you first enrolled will be kept.

How do I pay for renewal?

You can pay for your renewal using any of the major credit or debit cards, including Visa, Mastercard, Discover and more.

There are over 200 Airports that Accept TSA PreCheck across the entire United States. If you are not sure whether your local airport accepts TSA PreCheck, use the TSA PreCheck website to find out.

Can you use the TSA PreCheck lane when flying from a US airport to a foreign country?

TSA PreCheck is available when you depart from a U.S. airport to a foreign country, and for domestic, connecting flights after you return to the United States. If you travel to foreign countries even once a year, consider enrolling in Global Entry instead of TSA PreCheck. With Global Entry you’ll receive expedited customs processing when entering the United States, plus you’ll receive TSA PreCheck when flying from U.S. airports.

How do I apply for TSA PreCheck?

To apply for your TSA PreCheck membership, you first need to fill in an online application with your personal details. Ensure that the name that you write on this application form exactly matched the one on your passport and on the boarding pass you issue. Once you have applied online (the process takes around 5 minutes), you will be invited to a background check at your nearest enrollment centre. The in-person appointment usually takes no longer than 10 minutes. Find out where your nearest enrollment centre is located.

What is a TSA PreCheck number?

The TSA precheck number and NEXUS, SENTRI, or Global Entry card itself can not be used to access TSA PreCheck lanes, however, if you provide your TSA PreCheck to Alternative Airlines at the time of booking, we'll take care the rest and make sure that your known traveler number is linked to your flight and the TSA PreCheck indicator is embedded in the barcode of your boarding pass.