Looking for flights in Kenya? Silverstone Air has currently suspended passenger services. Please click on the logos below to find out more about airlines that fly similar routes within Kenya:

In December 2019 Silverstone Air suspended scheduled passenger services, which has remained the case through to the beginning of 2020. As of February, it has yet to be confirmed whether the airline will resume passenger services. Please see our news section below for more information.

Silverstone Air Services was founded in 2013 and is a private Kenyan airline, providing commercial flights to a number of destinations across Kenya. Silverstone Air operates daily scheduled flights to Mombasa, Ukunda, Malindi, Lamu, and Kisumu. The airline operates flights from its hub at Kenya’s Nairobi Wilson Airport (WIL). Most domestic flights within Kenya depart from Wilson Airport.

Silverstone Air is dedicated to providing an experience that exceeds each passenger’s expectations, as well as providing value for money.

Top Tip: Did you know, when you book Silverstone Air tickets through Alternative Airlines, you can pay for your tickets using M-Pesa (as well as over 160 other currencies)?

The airline provides scheduled services to seven (7) destinations from its hub at Wilson Airport:

Each passenger is permitted one piece of free checked (hold) baggage. The maximum permitted weight for baggage is 20 kilos, but be aware that this includes carry-on (hand) baggage.

Each passenger is entitled to one piece of carry-on baggage, with a max weight of 7 kg.

Please note that the airline states that the 20 kilos max weight for baggage includes both checked and carry-on baggage.

The airline may specify the maximum dimensions of your carry-on baggage once you have purchased your ticket. Otherwise, baggage which you carry onto the aircraft must fit under the seat in front of you or in an enclosed storage compartment in the cabin of the aircraft.

Top Tip: When you make your booking through Alternative Airlines, it is easy to add extra baggage to your reservation (but only on eligible flights, as on some flights baggage allowance per passenger is limited - this will be confirmed during the booking process).

Check-in at the Airport

Online check-in is not currently available for Silverstone Air.

Silverstone Air offers one cabin class: Standard Economy. The seating is akin to what you might expect from a low-cost economy cabin class. Depending on the aircraft, there is a maximum of 50 seats.

Despite the short flight times, a complimentary refreshment service is provided to all passengers. This includes a beverage and snack (biscuits). There are no Special Meal options are meals are not served - the snacks will not be suitable for those with special dietary needs. Passengers are welcome to bring their own snack onboard the plane, within their carry-on allowance.

There is no in-flight entertainment system available. Passengers are encouraged to download any entertainment onto personal devices before the flight.

WiFi is not currently available on Silverstone Air flights.

Seats are configured in a 2-2 formation. Passengers can sit comfortably in padded seats, which have headrests and armrests for your convenience. There is under-seat storage, overhead storage compartments, and fold-down trays.

Can I pre-book my Silverstone Air seat?

At the moment, the airline does not pre-allocate seats. Seat allocation will be arranged during the boarding process.

Check out our full guide to flying to the Masai Mara for more travel information!

The Masai Mara (or Maasai Mara, or just Mara) is a stunning preserved savannah wilderness in Kenya, known for its vast grassy plains and gentle rolling hills. The area has a rich cultural heritage and is famed for being an incredible destination for safaris. 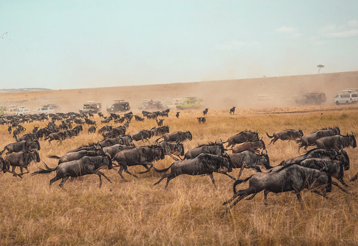 It is easy to visit the Masai Mara, which is about 270km/167mi northwest of the city of Nairobi, close to the country’s border with Tanzania. The drive has a reputation for being in poor condition; the easiest way to get to the Maasai Mara is definitely by air.

Fly to the Maasai Mara Reserve

Most international flights to Kenya arrive at Jomo Kenyatta International Airport (NBO), the main airport serving Nairobi, the country’s capital. Flights to the Masai Mara depart from Wilson Airport, which is just a short drive (30 mins approx) from NBO airport. From Wilson Airport, flights will head to one of a small number of airstrips within the Maasai Mara park. Silverstone Air is one of just a few airlines that provide scheduled passenger flights to the Maasai Mara reserve. The other airlines include:

The airline is based at Wilson Airport (WIL). WIL is an airport in Nairobi, Kenya. From the airport, a small number of airlines operate flights to many domestic and regional airports within Kenya.

The three other airlines that operate from Wilson Airport include Airkenya Express, Safarilink, Fly Tristar. It's also a secondary hub for Blue Sky Aviation.

The child fare is 75% of the adult fare (plus tax). The child fare only applies to children between the age of 2yrs and 12years. Identification (Birth Certificates/ Notification cards/ School ID/ Passports) will be required as identification.

Silverstone Air is not currently part of an airline alliance.

Silverstone Air does not currently offer a frequent flyer program.

Do I need a passport to fly with Silverstone Air?

The airline only operates domestic flights, meaning all flights depart and land within Kenya. Flights do not leave the country. All passengers are required to comply with the government of Kenya's travel requirements, and must present valid entry or exit documents. It is recommended that you travel with a passport.

Can I change my Silverstone Air ticket?

All Silverstone Air tickets are non-refundable and non-transferable. As stated in the airline's terms and conditions, Silverstone Air charges an amendment fee for any ticket changes, including name amendments or route amendments. If you have made your booking through Alternative Airlines, you can contact our customer service team to discuss making an amendment to your booking. Be aware that any amendments must be made prior to 12 hours before scheduled departure.

Some of Silverstone’s remaining fleet has been wet-leased out to domestic Somali carriers Salaam Air Express, SomAir, and Maandeeq Air.