The airline plans to operate to 40 different destinations across Inner Mongolia in its first five years of operation.

The airline was founded in 2018, under the name Tinjiao Airlines. In February 2018, the airline gained its business license. Shortly thereafter, it rebranded to Genghis Khan Airlines and gained its Air Operators Certificate (AOC). The airline flew its first flight in July 2019 with a service between Hohhot and Ulanhot.

Genghis Khan Airlines fleet consist of entirely Comac ARJ21 aircraft. The airline has 25 of in total. In its initial development plan, the airline projected that after eight years it expects its fleet size to double.

From its base in Hohhot, the airline flies to the following destinations within Inner Mongolia:

Excess baggage is available to purchase but no one piece of checked baggage can weigh more than 50kg.

Online check-in is available through the airline's official website. It might be necessary to translate the page to English to check-in. You can check-in under the 'self-service' tab.

Hohhot Baita International Airport is an international in Hohhot, Inner Mongolia, China and is the hub airport for Genghis Khan Airlines. The airport is the biggest and busiest airport in Inner Mongolia. Hohhot Baita International Airport opened in 1958 and has since had two expansions. The most recent saw the airport's terminal increase by 55,000 M² and saw it upgrade to have the capabilities to handle larger aircraft, such as the Boeing 747. 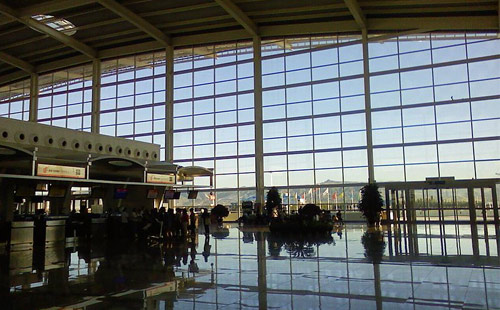