Flights to the 2022 Commonwealth Games

Book flights to the 2022 Commonwealth Games

Book your flights to the 2022 Commonwealth Games in Birmingham with Alternative Airlines. We've never made the process of booking flights quicker, easier and more flexible. We ticket 600+ airlines internationally making it really easy to get from your home city to Birmingham. We make the booking process flexible by allowing you to pay in your local currency with 160+ different ones supported. Want to pay with AMEX, Visa or Mastercard, you got it! Or want to spread the cost out but still book today? Easy, We have various 'buy now, pay later' options such as Klarna, Laybuy, Zip find out more about our 40+ payment methods today. Book now by using the search tool at the top of the page. Use our search tool at the top of the page or contact our customer service team to find out more.

About the Commonwealth Games

The Commonwealth Games bring are a sporting competition exclusively for countries part of the Commonwealth, former and current British colonies and territories dating back to 1930. Today approximately 72 countries participate in these games with some of the nations including Canada, Australia, New Zealand, India, Malaysia, Singapore, Cyprus, Belize and more. Like the Olympic Games, this event is held every 4 years and hosted by successful bidding cities, in 2022 the UK's Birmingham is set to be host. The games are founded on the principles of humanity, equality and destiny. Although a competitive event the games are often regarded as a ‘Friendly Games’, aiming to inspire athletes from all participating nations to embrace the spirit of friendship, fair play and sport. 2022 marks Birmingham's turn to play host following the 2018 games down under in the Gold Coast. This event will be the UK's third time hosting the tournament and the city of Birmingham and wider West Midlands first.

If travelling to Birmingham from within the UK then you are easily able to do so. Birmingham airport has direct domestic services to Aberdeen, Belfast City, Belfast International, Edinburgh, Glasgow, Guernsey, Gibraltar, Jersey, Inverness, Isle of Man. This makes it really easy to fly to the Commonwealth Games from other parts of the UK. However, Birmingham is centrally located and close to other major cities so there are no domestic flights from other places such as London, Manchester, Cardiff, Liverpool and more. You may need to use public or private transport to reach Birmingham from these locations.

Birmingham Airport has a wide range of international destinations you can travel from. You can easily travel from Delhi, Amritsar, Istanbul, Dublin, Paris, Amsterdam, Cancun, Hurghada, Malta, Sofia, Lisbon, Geneva, Dubai and more. The airport offers numerous international destinations primarily within Europe. However, Lufthansa, KLM, Air France and Emirates all operate direct services to their hub airports you could easily connect via one of these airlines hubs onto Birmingham. You could also fly into one of the UK's other major international airports such as Manchester or Heathrow.

Manchester Airport is another international airport you could choose to fly into. The airport is located in northwest England and is under 2 hours from Birmingham. The airport offers a range of airlines and destinations across the UK, Europe, the Americas, the Middle East and Asia. The airport makes an attractive alternative to Birmingham and Heathrow. The airport is connected to Manchester by national rail services as well as the Manchester Metrolink. You can easily get from the airport to Birmingham via Transpennine services to Manchester Piccadilly, changing to a CrossCountry train or by getting a Northern Trains service to Crewe from the airport and changing for either Avanti West Coast or London Northwestern Railway services. The airport is also served by numerous national and local bus services as well as numerous car hire and taxi companies.

London Heathrow Airport is one of the many airports serving the London area, it is also the UK's primary international airport. Although not located that close to Birmingham it may prove a great alternative to Birmingham Airport. Heathrow has hundreds of international destinations and airlines making it extremely easy to arrive from one of the commonwealth countries. The airport offers destinations across Europe, the Americas, Africa, Asia, the Middle East and Oceania. If choosing to fly into Heathrow then a connection up to Birmingham will be needed. As the distance is around 2 hours domestic flights aren't available. You can easily use the National Express coach service to Birmingham or use one of the many taxi or car hire outlets. If you are transiting by train, then head to Marylebone Station and get a Chiltern Rail service to Birmingham Moor Street. Alternatively, head to Euston Station and get either an Avanti West Coast or London Northwestern Railway service to Birmingham New Street. 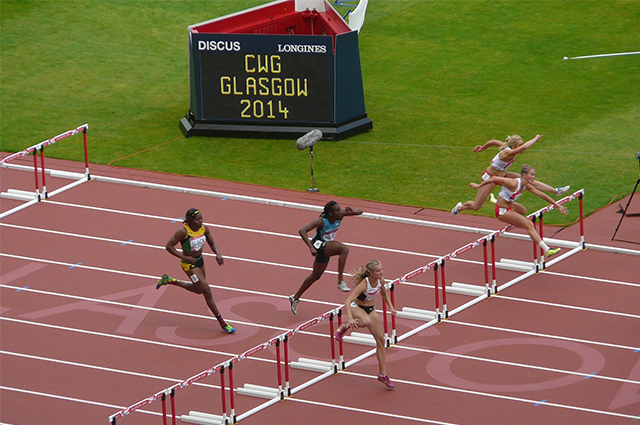 When is the Commonwealth Games?

The 2022 Commonwealth Games are due to be held on 28th July with the final day being until 8th August 2022.

It was announced that the 2022 Commonwealth Games are to be hosted by the city of Birmingham in the United Kingdom.

How do I get tickets to Birmingham 2022?

To attend the events during Birmingham 2022 you will need to visit the official website. Tickets are currently on sale. If you are purchasing tickets from outside of the UK please visit your local Commonwealth Games website to purchase tickets.

Who is participating in the games?

Unlike the Olympic and Winter Olympic games held by the IOC, the Commonwealth Games is open to select nations. Any country which is a member of the Commonwealth of Nations is invited to participate in the competition. It is expected that 72 nations will participate including Canada, Australia, New Zealand, India, Malaysia, Singapore, Cyprus, Belize and more. Interestingly the UK doesn't compete as one but each nation (England, Wales, Scotland & Northern Ireland) competes individually.

How do I fly to the Birmingham Commonwealth Games?

It is really easy to fly to Birmingham 2022. The easiest airport to arrive at is Birmingham Airport as it is about 30 minutes from the city centre. The UK is a small country and Birmingham is centrally located. This means that you could alternatively fly to Manchester or London Heathrow offering a wider range of destinations and airlines.

How do I buy flights to Commonwealth Games 2022?

Simply use the flight search tool at the top of the page. Set your departure city and the arrival city, BHX if flying directly to Birmingham. Set the dates, travel class and passengers flying then hit search. You'll easily be able to filter the results by connection, airline, time and price helping you find the flight best for your plans.

How can I pay for flights to Birmingham 2022?

We make it easy to pay for your flights by accepting over 160 currencies. You can easily pay in your local currency or in GBP, CAD, AUD, SGD, BZD and more. We also offer flexible payments with both pay in full options as well as 'Buy now, Pay later'. We support 40+ payment methods including Diners Club, AMEX, VISA, Klarna, Afterpay, Zip and more. For more information on how to pay please visit our dedicated payments page.