Delta Air Lines, otherwise known as Delta, is a major US-based airline headquartered in Atlanta, Georgia. The airline has many hubs spread across the US including Boston, Detroit, Los Angeles, New York and Seattle. Delta flies to over 320 destinations internationally and domestically and is ranked 2nd among the world's largest airlines based on the number of passengers carried and fleet size.

Looking to book Delta Basic Economy tickets? You can do so right here at Alternative Airlines. We've got a guide below that will show you how to book Basic Economy flights with Delta and what's included in the airfare!

What are Delta Basic Economy Flights?

Basic Economy is a type of airfare that is offered to customers by airlines. This type of airfare is usually the cheapest ticket you can purchase and has the least amount of bundles or perks available on a flight. Basic Economy tickets are often non-refundable with very little flexibility available if you need to cancel or change your flight. Normally with these types of tickets, there is very little allowance for baggage and meals might not be included. Other amenities that might not be available with a Basic Economy ticket include priority boarding and seat selection.

How to Book Basic Economy Flights with Delta

Firstly, using the search form at the top of the page, fill in your departure and arrival destinations, the dates you plan to fly and how many passengers will be flying. You can also choose your preferred cabin class - in this example, for Basic Economy flights you'll need to have 'Economy/Coach' selected. Hit the 'Search Flights' button when you're ready! 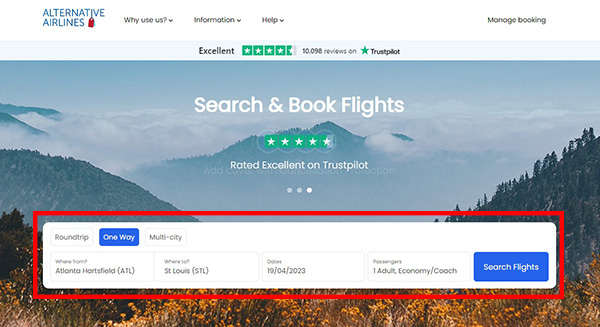 Once the search results have loaded, you can use the 'Airline' filter to only show flights operated by your preferred airline, e.g. Delta Air Lines. You can also see the type of fare that the airline is offering for the route you have searched for, e.g. Basic Economy with Delta. Pick the flight that best suits you and click 'Confirm Selection' to proceed. 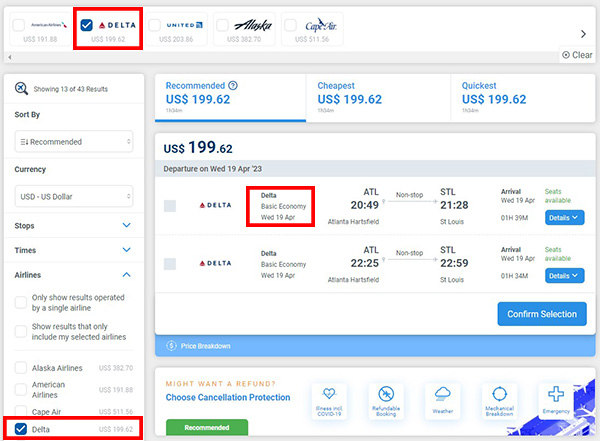 After you've confirmed your selection, you can see what's included in your Basic Economy fare and even upgrade your fare type at an extra cost. You can compare amenities between different fare types too! 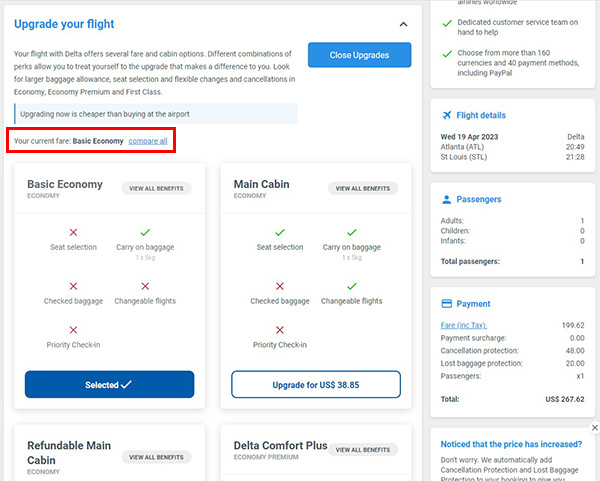 In-flight entertainment is available when you book a Delta Basic Economy flight - there's complimentary access to movies and TV shows via Delta Studio. You'll even be able to use in-flight messaging

Picking where you'll sit on a plane is part of the exciting experience of travelling by air! Unfortunately, with Delta's Basic Economy ticket you won't be able to pick your seats. Seats will be assigned after check-in by Delta. If your seat number doesn't appear on your boarding pass, your seat will be assigned at the gate before you board the aircraft. Basic Economy seats on a Delta flight are located in the Main Cabin, towards the rear of the plane.

When you fly with Delta on a Basic Economy ticket, you'll be treated with complimentary snacks and non-alcoholic beverages such as Starbucks coffee, tea, juice, sodas or water. Hot food is not available unless you have booked a Delta One or First Class ticket with Delta.

What does Basic Economy with Delta include?

A Basic Economy ticket with Delta consists of the most basic amenities on a flight. Seat selection is not available - seats are assigned at the time of check-in. Hot meals are not included but you'll be given complimentary snacks and soft drinks. In-flight entertainment is provided where you'll have access to Delta Studio which is Delta's database for movies and TV shows.

Can I book Delta Basic Economy flights at Alternative Airlines?

Of course! At Alternative Airlines, you can search for flights with any fare type, including Basic Economy with Delta. You can use our step-by-step guide from earlier to help you find the best flight for you, from Economy to First Class! It's as easy as filling in our search form at the top of the page and selecting 'Economy' - this means in the search results, the first results to show up will be Economy flights.

Yes. With a Delta Basic Economy fare type, you're permitted one personal item (a purse, a laptop bag, etc.) and one carry-on bag that must fit underneath the seat in front of you. The carry-on bag mustn't exceed the linear dimension of 45in (114cm) and weight of 7kg (15lbs).