Afriqiyah Airways flies from Tripoli to London Gatwick four times a week on Tuesdays, Thursdays, Fridays and Saturdays. Afriqiyah Airways covers some of the major destinations in Africa like Abidjan, Accra, Lagos, Johannesburg and Douala.

In 2010, Afriqiyah Airways and Libyan Airlines were expected to merge into one airline, which was later postponed. As a consequence of the Libyan Civil War and the resulting no-fly zone over the country enforced by NATO, all flight operations by Afriqiyah Airways were terminated on 17 March 2011.

Afriqiyah Airways is the Arabic word for ‘African’ and its aircraft are painted in striking colours of red, green, yellow and black reflecting the colours of Africa. 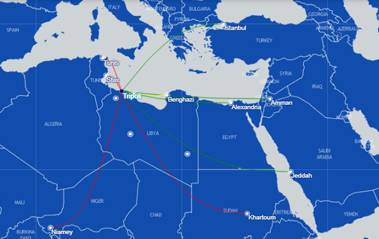 Update: The airport has been closed intermittently since 2011 and flights to and from Tripoli have been using Mitiga International Airport instead.

Misrata Airport is an international airport serving Misrata, the Mediterranean coastal city in the Misrata District of Libya. The airport is also the air base and training center for the Libyan Air Force.