Make a Booking today and Find Some Amazing Deals

Olympic Air is a Greek airline and a subsidiary of the Greek airline carrier Aegean Airlines. The combination with Aegean Airlines connects every corner of Greece, flying to 111 international destinations and 34 Greek airports, while through Star Alliance network passengers can fly all over the world.

The airline was originally formed from the privatisation of the former Greek national carrier Olympic Airlines after which the new airline commenced operations in September 2009 after Olympic Airlines ceased all operations. In October 2012, it was announced that Aegean Airlines was acquiring Olympic Air for €75 million and the latter is now a service provider for parent company Aegean Airlines. The former CEO of Olympic Aviation, founded another airline, Astra Airlines, which is based at Thessaloniki International Airport.

With a primary base in Athens International Airport "Eleftherios Venizelos" and secondary hub at "Diagoras" Airport in Rhodes, the airline performs approximately 164 flights per day, travelling to a total of 34 Greek destinations with its fleet of DASH 8 100 and DASH 8 400.

This Greek airline serves over 30 destinations within Greece, with an additional service to Cyprus. Take a look at the table below for a full overview of the destinations that the airline flies to.

Previously this airline operated flights to many international destinations, such as the United Kingdom, Italy, Belgium, Bulgaria, Egypt and Romania, although these have now all been terminated. 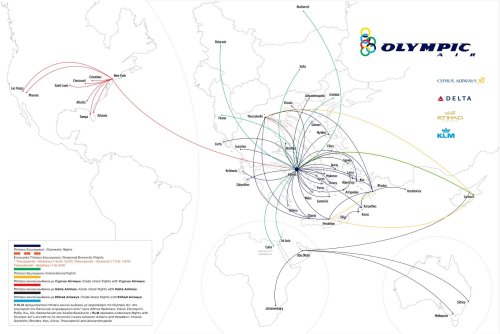 Economy Class - 1 piece of baggage of up to 23 kgs

Business Class passengers- 2 x pieces of baggage up to 32 kgs each.

Two carry-on bags of up to 8kg and 5kg respectively, 2 bags of up to 32 kg each; unlimited ticket changes without rebooking fees to flex and business; ticket is refundable; special check-in counters; use of business class lounges and priority baggage pick-up.

This airline offers economy class as standard, with two different fare classes available to purchase; GoLight and Flex. Although they provide the same cabin experience, the Flex ticket allows passengers to change their tickets without incurring a fee. This class gives passengers an enjoyable flight with the utmost relaxation and comfort guaranteed from the impeccable service of the crew.

Passengers can choose to book on the business class ticket to get an even better quality service and more comfort on your flight. Business Class passengers have increased baggage allowance, dedicated check-in counters, priority baggage reclaim and also access to Business Lounges at the airport.

The airline used to have codeshare agreements with various carriers including Delta Air Lines, Etihad, Tarom and KLM. Most of the agreements were terminated once the carrier was bought by Aegean Airlines.

Members could earn miles on other airlines such as Delta Air Lines but also on car rentals and hotels. It consisted of three levels: Blue, Silver and Gold. On November 24, 2014 Travelair Club was absorbed by Aegean Airlines's frequent flyer programme Miles & Bonus, with appropriate status matches. Migration of status and miles from the closed program was available until June 1, 2015.

After you purchase your ticket with Alternative Airlines, you can check-in online from the airline’s website directly. You can check-in between 48 hours and 30 minutes before departure. So even if you're a little bit last minute, you won't miss out on the benefits of checking in online! Check out our online check-in page for further details.

Please note: the self-service kiosks are only available on flights departing from the following airports:

Other than Olympic Air, other airlines that are based at Athens International include Aegean Airlines, Ellinair, Ryanair, and Sky Express. There are several other international carriers that fly to/from the airport, such as Aeroflot, Air France, Bulgaria Air, El Al, Iberia, MEA, Pegasus Airlines, Sky Express, Volotea and more.