Flying through Storms and Hurricanes

Have you ever wondered if it's safe to fly through a thunderstorm? Or whether planes can fly through the eye of a hurricane? Find out everything you need to know about the safety of flying through bad weather here. 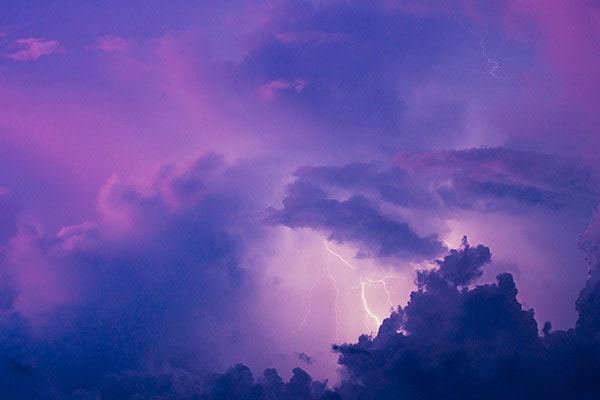 How safe is flying through a storm?

If you're flying through the air and you see lightning strike out of the window, it might seem scary, but it's important to remember that all aircraft are built to withstand bad weather and turbulence. Not forgetting that aircraft are also required to comply with safety thresholds provided by the FAA (Federal Aviation Administration), the US equivalent of the Civil Aviation Authority in the UK. For this reason, flying through a thunderstorm is generally safe. In the case of extreme weather, air traffic controllers will always direct aircraft above or around severe thunderstorms to avoid uncomfortable turbulence or any damage being done to the aircraft. Remember that your plane will never be directed to fly through a severe storm.

Can you fly through a tropical storm?

Is it safe to fly through a rainstorm?

All planes are designed to fly through thunderstorms and have to comply with safety regulations. A rainstorm is unlikely to cause damage to the aircraft. The only danger of flying during bad weather is the risk of freezing rain, but in this case, your plane will most likely be delayed until the storm passes.

What happens if a plane is struck by lightning?

Just as car passengers are protected by the vehicle's metal frame during a lightning strike, plane passengers to are unlikely to be in danger from lightning bolts when flying during a storm. The electric current will travel alongside the aluminium frame on the outside of the plane and exit at the tail, meanwhile, the passengers inside are well-protected. Although a lightning strike is unlikely to cause damage to an aircraft, airlines may choose to ground the aircraft in order to carry out checks before returning it to service.

Flying through a thunderstorm can sometimes be unsettling as windy storms and jetstreams increase flight turbulence. This may cause the plane to jump about and feel rather uncomfortable, but the reality is that flying in particularly windy conditions is generally safe. It's important to know that pilots will not fly in dangerous weather conditions and that your plane will always be directed around or above dangerous storms and bad weather.

Can you fly through a hail storm?

Hailstorms will generally cause planes to be grounded and diverted as hail can cause damage to the aircraft's wings and frames. For this reason, flights will normally be grounded or rerouted to avoid hailstorms.

What happens if my flight is cancelled due to bad weather?

If your flight is cancelled due to adverse weather conditions then you will normally be booked onto the next available departing flight. You may also be able to request a refund but this will depend on the policy of the individual airline.

Can planes fly through hurricanes?

Hurricanes differ from thunderstorms in that they often occur much closer to the ground. For this reason, planes are sometimes able to fly over hurricanes rather than being redirected around them. While it is possible for planes to fly through the eye of a hurricane, this is only ever done for scientific research. In this case, the flight will be carried out by specialist bodies, such as the National Oceanic and Atmospheric Administration, and never by commercial aircraft.

Do flights get cancelled due to a hurricane?

Yes, hurricanes will most likely postpone or cancel your flight for safety reasons and the risk it can cause to the plane and passengers if travelling through the storm.

Does lightning strike a plane?

Lightning can strike a plane when travelling through or near a storm, however, you'll still remain safe when in the air. The aircraft are designed to withstand lightning strikes and the electric current travels alongside the aluminium frame.