2023 will see the 91st running of the 24 hour Le Mans race. The endurance race, which takes place annually, will be held at the circuit de la Sarthe, Le Mans, France. The track is composed of public roads (closed during the event) and sections of the racing track. Le Mans is the world's oldest endurance racing event. The previous race, held in 2022, was won by Toyota, in the hands of Buemi, Hartley & Hirakawa.

Don't want to miss the action? Use this guide to discover the nearest airports to Le Mans. You can search and book flights with any of the airlines listed below with Alternative Airlines. Simply use the search form at the top of the page to begin.

Where is the 24 hours of Le Mans held?

The venue for Le Mans is the Circuit de la Sarthe, near the town of Le Mans, France.

Le Mans is held at the circuit de la Sarthe. Comprised of private track, the course also incorporates public roads (closed to the public during the event) for the 24 hour race. The Circuit de la Sarthe is located on the edge of the town of Le Mans, Maine, western France. The nearest international airport to Le Mans is Tours Val de Loire Airport (TUF), which is served by Irish carrier Ryanair. The airline flies to/from to the UK (London), Morocco (Marrakesh), France (Marseille) and Portugal (Porto). Alternatively, you can fly to Paris' Charles de Gaulle Airport, which is about 2.5 hours from Le Mans by car.

Find out more about both of these airports below. 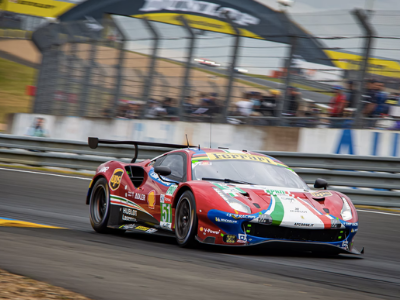 Tours Val de Loire Airport (TUF) is the closest international airport to Le Mans. The only carrier to operate scheduled passenger flights to/from TUF is Ryanair. The airline operates flights to the following destinations within Europe and Africa: UK (London), Morocco (Marrakesh), France (Marseille) and Portugal (Porto). You can fly Directly from these cities to Le Mans with Ryanair. If you're travelling internationally from elsewhere, you'll either need to make a connecting flight, or fly to an alternative airport.

Paris Charles de Gaulle Airport (CDG) is further from Le Mans (approximately 2 hours and 50 minutes by car), but has a greater number of international flights. If you're flying from a destination not served by direct flights to Tours Val de Loire Airport, then Paris Charles de Gaulle Airport will be your best alterative. CDG is served by a large number of international carriers, opering flights to destinations around the world.

Six teams have already claimed a place on the grid for the 2022 24 Hours of Le Mans race. This is based on their performance in the 2021 European Le Mans Series or Michelin Le Mans Cup, or thanks to their result at 2021 edition of the legendary French marathon. These teams are as follows:

AF Corse: LMGTE Am winner at the 2021 24 Hours of Le Mans (invited to defend their LMGTE Am title)

Spirit Of Race: 2021 ELMS LMGTE runner-up (invited to compete in LMGTE Am)

What is the best airport for international flights to Le Mans?

If you're flying from a select number of destinations, including the UK, Portugal and Morocco, you can fly to Tours Val de Loire Airport. This is the closest airport to Le Mans. However, there are only a small number of flights operated to this airport by Ryanair. Alternatively, you may find that flying to Paris is your best option. There are hundreds of flights each day arriving at Paris from countries around the world.

How can I fly to Le Mans from the UK?

Can I fly domestically to Le Mans?

Through Alternative Airlines! We can help you book flights to Le Mans. Use this guide to discover the easiest airport to fly into, depending on where you're departing from. Then use the search form at the top of the page to find and book your flights. We ticket over 600 global airlines, including all major carriers flying to France. Book flights with Ryanair, easyJet, Air France, Lusthansa, and all of the other airlines listed on this page.