Search and book flights with Aerocon 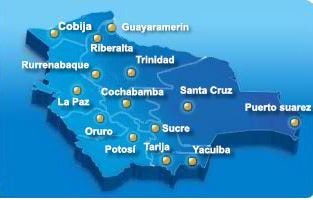 El Trompillo Airport is the airport serving the Santa Cruz, Bolivia and is the hub airport for Aercon. Transporte Aereo Militar also fly to and from this airport.

El Trompillo has one runaway and can handle nearly 500,000 passengers every year.

Reaching its 10th anniversary in 2015, Aerocon (Aero Comercial Oriente Norte Ltda) is a Bolivian domestic airline from the provincial city of Santa Cruz de la Sierra but with its operational base at Trinidad, in the Beni province of Bolivia. Aerocon has an expanding domestic flight network from Trinidad to cities which include Cobija, Cochabamba, Guayaramerín, La Paz, Riberalta, Santa Cruz, Yacuiba, Potosi, Oruru, Sucre, Uyuni and Tarija. Aerocon operates a fleet of Fairchild Metro aircraft with 4 x Metro 23 and 5 x Metro 111 variants. Bolivian aviation continues to grow and Aerocon is one of the pioneers in connecting the Bolivian regional cities over difficult mountainous terrain.
READ MORE ABOUT AEROCON