Alternative Airlines, a UK-based online flight search and booking website, recently held a fundraising event and raised £1500 for the UK’s National Health Service (NHS), to express its gratitude for key workers during the COVID-19 pandemic.

With many European borders closed, employees of the company undertook a seven-day challenge to walk, run or cycle the same distance from their offices near Gatwick Airport in the UK to Amsterdam Schiphol Airport in the Netherlands. Each employee travelled locally in their area and tracked their distance day by day by using an exercise tracking mobile app. The challenge would be complete when the accumulative distance for all employees reached 541 km, which is the same distance between Alternative Airlines’ offices and the main international airport in Amsterdam. Amsterdam was chosen as the flight website’s top-selling European destination outside of the UK. 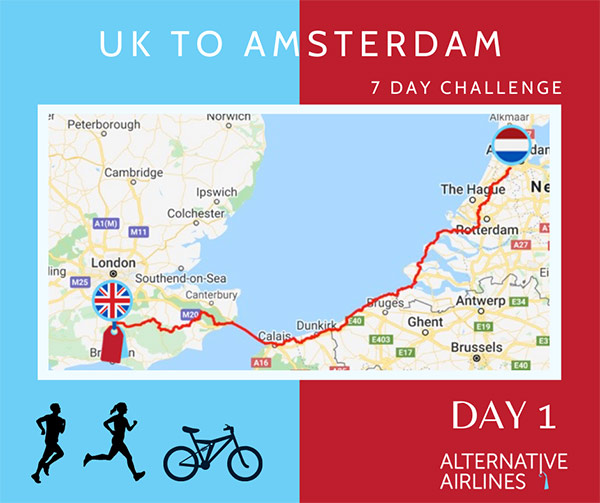 When asked how the idea for a fundraiser arose, Operations Manager, Shelley Tasker, who organised the event, said “the pandemic has really highlighted the societal importance of key workers and we’ve been amazed and so grateful for each and every key worker that has kept the world moving and looked after us. As a business, we wanted to give something back. It’s been a particularly challenging time for companies within the travel industry and, as a result, our staff have been working reduced hours. We thought it’d be a great idea to use some of the time that we were no longer working and put it into an event that would raise as much money as possible for a charity that supports key workers.”

Alternative Airlines chose to raise money for NHS Charities Together, which is an organisation that supports over 140 official NHS Charities that give money to the NHS to enhance patient care. Tasker explained, “I think that everyone in the UK is in agreement that no one has worked harder or put themselves at greater risk than NHS workers since COVID-19 entered the country. We’re eternally grateful for everything that they do, not just through the pandemic but every single day. We’re delighted to have raised £1500 for NHS Charities Together and are very thankful for the support that we received and everyone that sponsored us.”

Managing Director of Alternative Airlines, Sam Argyle, stated “We’re extremely proud of the money that we raised for such a brilliant cause. Each person who partook embraced the challenge admirably and it certainly brought everyone closer together at a time when we’ve all been working remotely.”

While nothing official has been announced yet, after the success of this fundraiser, Alternative Airlines is keen to follow through on other plans of similar initiatives that give back to society in the near future.

Alternative Airlines is a flight-search website that offers a fast, easy and convenient way to book flights to remote destinations, as well as well-known locations. Alternative Airlines specialises in providing travellers with a wider choice of flights by working with more than 600 airlines including the smaller, regional ones across the world, especially in Latin America, the Caribbean, Africa and South-East Asia. Alternative Airlines’ global audience can enjoy over 25 international payment methods across 160 currencies.