Alternative Airlines, the flight booking platform and online travel agent, has announced figures that validate the success of its innovative partnership with Duffel - the fast-growing software platform that enables anyone to sell flight products - a sign of the growing significance of New Distribution Capability (NDC) technology to the airline sector as it weathers the difficulties of the Covid pandemic.

The partnership between Duffel and Alternative Airlines, launched in January, has allowed Alternative Airlines to offer rich, real-time flight content through NDC on a number of global airlines using Duffel’s technology. NDC lets airlines and travel companies ‘talk’ to each other more easily; this includes the exchange of ancillary information and deals, such as in-flight meals, extra luggage and seat selection.

These figures suggest that the ability Duffel provides to tailor offerings and bookings to specific consumers, and to provide a greater range of choices, helps to sell seats in a challenging economic climate for the travel sector.

Managing Director of Alternative Airlines, Sam Argyle, said: “It’s been abundantly clear for a while that NDC is the future of airline distribution and it’s fantastic that Duffel makes it easy to implement. Alternative Airlines has always strived to offer a seamless and personalised platform to book flights on any airline in the world, no matter the niche. As established carriers such as American Airlines, British Airways and Lufthansa lead the way in distributing content through NDC, we’re excited for the rest of the industry to follow suit – so that we can continue to provide our customers with the best fares and with the maximum amount of choice on all flight searches.” 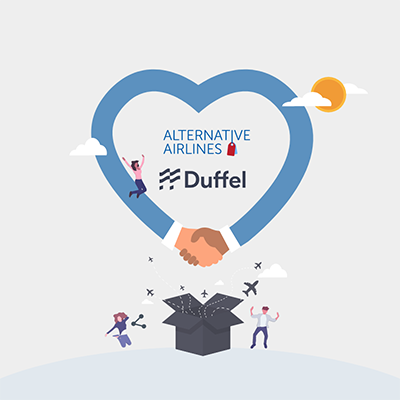 Qatar Airways, United Airlines and Emirates will all be available soon.

For Alternative Airlines, the advantages of NDC come in more choice for its customers through richer content. NDC has given the flight search and booking website access to a greater variety of competitive content. It has never been easier for Alternative Airlines to access and display airline content with the level of detail and customisation that NDC allows for.

For the airlines, the benefits come in speed and flexibility. Airlines can release fares and additional services to Alternative Airlines through NDC instantaneously, while also having total control over the specifics of the content that they allow Alternative Airlines and other travel agents to access. Steve Domin, Duffel’s CEO and co-founder, said: “The success of the partnership with Alternative Airlines shows how Duffel’s platform is the fastest integration for developers to build a seamless flight booking experience with access to exclusive content. As airlines move forward with NDC, Duffel’s tools are essential in enabling sellers to access all airline content in no time and win even more customers.”

Alternative Airlines is a flight-search website that offers a fast, easy and convenient way to book flights to remote destinations, as well as well-known locations. Alternative Airlines specialises in providing travellers with a wider choice of flights by working with more than 600 airlines including the smaller, regional ones across the world, especially in Latin America, the Caribbean, Africa and South-East Asia. Alternative Airlines’ global audience can enjoy over 25 international payment methods across 160 currencies.

Duffel offers the best API to sell flights on the internet. Founded in 2017, London-based Duffel is powering the next generation of online businesses transforming travel through the most powerful and intuitive online platform to search, book and manage flights.